I have this memory of my grandfather and I.

On a Thursday, I was about to leave early from the family’s weekly dinner at my grandfather’s house on Wolskel Road.

My grandfather asked where I was going, and for what.

I was either performing or rehearsing for a show. Which show was inconsequential, but the fact that I wanted a future in theatre-making was consequential enough to be given a watchful eye and a chiding silence whenever I had to excuse myself for “work” because who works in the evenings?

These were early days, when I was just starting out in theatre.

I braced myself, and replied, in broken Mandarin, “It’s this and this show.”

Who’s doing it? It was not a tone suggesting he was interested to watch or support.

“It’s by this and this company, relatively new. We’ll be at The Substation.”

To be able to work on the third iteration of Liao Zhai Rocks! 聊斋 so many years later was a privilege I relished. At the core of the musical was a beautiful story. Not only that, the creative team really inspired me.

But, I use that word specifically because Mandarin does not sit fluently in my being as much as English. Anytime anyone considers me for a Mandarin role, I am first skeptical – why me? Frankly, I don’t pursue roles in Mandarin because I need to spend a lot of time technically working the language. I am afraid that I won’t be able to get to a level that is respectful of the language and worthy of the show within the span of most rehearsal periods. I have only done it 3 times to date. The first time was a full play and I spent 6 months purely getting the text down before rehearsals even started. I think I managed a technical performance at best. The second time was less scary: an ensemble role in a musical – I can sing Mandarin as well as I can sing in Italian – by working that muscle memory.

Even so, LZR is probably one of the most technically challenging ensemble roles. Seeing my (then 20s) peers in the first iteration sweating it out on stage, and then visiting their beaten bodies back stage left a deep, sweaty impression. In its second iteration, friends commiserated about the intense change in choreography and spoke of the buckets of sweat drenching the floors of Theatre Practice’s Stamford Arts studio. So saying yes to the LZR ensemble will mean submitting to a regiment and technical process that would challenge the body and mind, and I will need to attack the dance requirements with determination and discipline.

Mandarin + one of the most demanding performance tracks that I know of =  a killer technical challenge hor. But can lah. I probably won’t get any of the speaking lines anyway, there were others in the ensemble who had a better foundation of the language than me, so I don’t think I need to stress about speaking Mandarin.

So, I said yes. I wanted a chance to work with Theatre Practice, Jian Hong, and wow, Shanghai leh.

Then, I saw the scene breakdown and role allocation for the ensemble. I gagged: Jian Hong gave me lines, an entire character in a featured ensemble role. In Shanghai. In China.

For me, text work is not just building technical fluidity, but also confidence.

I have to turn out a good performance, not just for the show, not just for the our pride for Singapore theatre in China, but for the most basic of reasons, for myself and the actor’s craft. I never asked Jian Hong why she gave me those lines.

Thankfully, she was relentless to get me ready and confident to deliver the character and the lines. Considering the limited time we had, I thought I got much more of her time than the lines or I deserved. My scene partners were also infinitely patient. I cringe when I think of the first few times we rehearsed our scenes. How embarrassing that floundering was.

You understand so much more of your own when you learn those of others.

To date, aside from Mandarin and Teochew, I have also dabbled in French, Italian, Thai, and most recently Spanish lessons. I think the hardest thing to master in using language is not technical pronunciation or vocabulary but moving the language from cerebral struggles into physical fluidity, where the cadence and meter bounce and reverberate not just off tongue and teeth but from heart and soul. I am still only fluent in English, but each time I foray into work involving language that is not my own, my vocabulary for the human condition expands.

I marvel at how the English subtitles of our show barely convey the beautiful anguish contained in the Mandarin. I marvel at the layered meanings that emerge when one plays with the musicality of Mandarin. I wish I had the talent of a polyglot.

Now, looking back at the process that began in February and ended on the first of April, I miss the intensity of the rehearsal process. We worked bloody hard to be song ready, off-book, choreo ready, and physically and mentally fit for the show. Some days, warm up was a game of Captain’s Ball – an infamous TTP practice.

The score of Captain’s Ball was inconsequential to the show, but those games were blood baths. That determination to score for the team reflected our attitude at work.

You see, when everyone is pushing themselves to be their best, to bring their A-game, one can’t help but focus on your own game. Are you able to stay grounded, to receive and respond amidst the melee? Are you breaking the synchrony required? Can you find a fresh take on an intention? Do you take care of your fellow actor because god knows you will need that same care at some point or another?

I learned the most about acting from ensemble work (young and W!LD and Collab Theatre), and I relished every moment of LZR’s gruelling process where mind, body and soul was demanded. The energy of an ensemble in-sync is electrifying.

When we were packing up at Waterloo, after our last full run before Shanghai, I felt the sadness of goodbye. Is there such a thing as post-rehearsal blues? Friendship is built on foundations such as these, and should not be taken for granted. I am grateful for Jian Hong’s faith in my potential, Hui Xuan and Julians’ encouragement and firmness, and my co-actors’ patience and generosity. 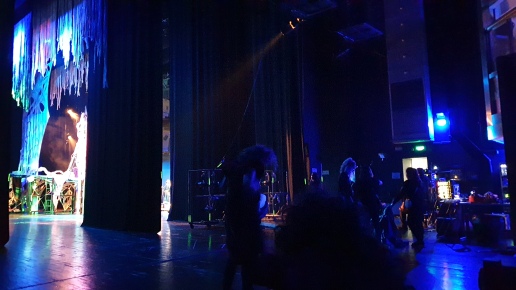 Shanghai came and went, as most actual productions do too. I barely got to see anything beyond the proscenium. We entered the theatre before business hours, and left the theatre when darkness and quiet had settled in. Time was that tight and I FOMO-ed to the max on some nights. But really, I didn’t need to see Shanghai. I finally got to work with The Theatre Practice.

I wonder what my grandfather would have said that evening if I told him I was going to to rehearse at The Theatre Practice for their first show in China.

(Program from the show is archived at http://practice.org.sg/assets/E-Programme/Liao-Zhai-Rocks-2019-e-programme.pdf)