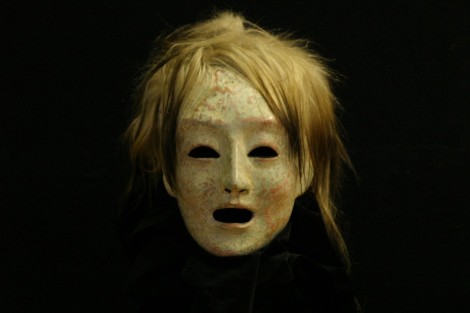 The appearance of the tragic mask of the classical era is a representation of a body/mind state of being. A state of meditation is created within the mask wearer, either by focusing the gaze at a single point or by the voice—or more specifically—by the cries, found in the tragic texts as original, archetypical sounds; words without lexical meaning and usually not translatable. That part of vocalisation is able to evoke an enormous range of emotional connotations. The cries correspond to different resonance chambers in the human body and lead to a metamorphosis. This has a physiological effect on the actor: the human face acquires the appearance of the tragic mask. The face radiates great intensity and presence. The face is expressionless, in a state of total presence, a state of emptiness. The tragic mask represents this state of mind and this is the state of mind the actor has to assume on stage. We define this state of body/mind as a state of kenosis (emptying, depletion) and the tragic mask as the mask of kenosis. The mask has no expression (though is by no means a neutral mask), but it is not a character mask either. The mask of kenosis has no physiognomic traits that make it possible for the audience to define the character of the stage figure through the appearance of the mask. The mask does not present on stage any fixed human types. Instead, its features correspond only to indications of sex, age, ethnic origins, social status and other dichotomies such as human or divine, living or dead.
The mask does not give to the audience any key to read the character, but it becomes a projection screen for the actions of the role. The mask creates an empty space for the reflection of the spectator.
The Acoustical Mask of Greek Tragedy
by Thanos Vovolis   Giorgos Zamboulakis