I don’t remember what they called him at the SPCA. I only gave him the name “Nacho” after a day or two. Nacho was the first dog that I called mine. I was 22 going on 23.

I remember going to camp in the morning and wanting to call home to let him hear my voice. There was no one at home, and he certainly couldn’t pick up the phone. I thought, I’ll just call anyway and say coochy-coo things over the voice machine…but he was in the yard and the machine is not within his earshot. Nevermind, I’ll just shout really loudly into the phone.

Nacho was extremely playful as an adolescent. He was the size of a retriever but had the personality of a chihuahua when he was young. Jumpy and nibbly, he would bolt up and down the yard, whenever we played catch the tail. He was so, so fast.

He loved his walks. You would get an arm workout trying to hold onto his leash the first 10mins of every walk…even after his hip surgery made it difficult for him to climb stairs.

Nacho never hurried to finish his food, which was a bit of an annoyance for me when I was feeding him before going to work because sometimes he would take hours! He would share his bowl with mynahs, who in gratitude would poop all around the bowl. For a period of time, I resorted to night feedings, when the birds had gone to roost. Since my parents took over the responsibility of feeding him, they’ve hasten his chomping by tempting him with his favorite meats stirred into the dry meal. Still there were days he would eat half before wandering off, not caring that Mocha, the always hungry one, would finish it off for him.

Nacho always greeted me whenever I came home. Even when it got hard for him to stand and lie down, he would still do so. He’d smell every part of my body before licking my elbows. Only my elbows or fingers as I didn’t really like being licked, and certainly not on my face. I was ticklish but he did it anyway. I saw the act as an inspection, to smell where I had been, a ritual to clear me of the outside. He somehow always knew when I wasn’t feeling great. He didn’t always listen though, sometimes preferring to walk away. He caught me off guard once and he managed to lick a tear or two away before I got grossed out.

Nacho was generous. Anyone was a friend once past our gates. He knew when to be protective and when to be friendly.

Outside though, I was the only one who could tell when he’d get snappy. He has bitten a Gurkha, an Indian, a Chinese, a Singaporean, but never under my watch. He was always protective, I suppose. Once I yelped in shock over something inconsequential, he started barking at the person who startled me.

Nacho hates the rain. Usually calm and confident, he’d wither into a droopy wet mess, zipping in and out of the rain until I let him in. That’s the only time he was allowed in the hall. The kitchen was fine, but he dreaded it as it was where he slept when he was sick, or when we needed to keep him indoors for a long period of time. I don’t think he liked being indoors at all.

Once, when he was maybe 4 or 5 years old, I came home after midnight to find the gates wide open, Nacho gone. After screaming at my careless brother, I drove out to search for him. It was raining. I found him very, very, very far from home. When he saw me, he literally jumped into my arms. He was a big muddy dog. He got into the car without any of the usual cajoling. Since then, he has wandered off a couple of times, but never too far that he didn’t know how to get home or be found.

One of the saddest things is to see how your puppy loses his yippiness, his ability to bolt, his sense of hearing, his vitality. Nacho was by all indications healthy and his usual self until my mom found him this morning. He died in his sleep, at his spot. He had his favorite snack (bread) before we left him for the night. He could have had one more walk but it had been pouring. I didn’t get to say goodbye but I am most glad he did not suffer in his last hours, that my last memory of him is of his thick golden fur between my fingers, warm, smelly, doggy breath on my face, and a cold, wet nose sniffing my elbow.

I can’t help feel that Nacho decided to wait a year before deciding to go. It has been a difficult year of healing, forgetting, and loneliness – depths of feelings impossible to confide even with the most caring of human companions. He must have known I was better.

I grew up with dogs. Dogs prepare you for the worst in the world, such as death, but they also sooth you when your world is at its worst. Inexplicably, the slightest kindness would be returned tenfold. That’s why adopting is the best thing you can do for yourself, and the furry life you are saving.

I had finally received my posting to MDC, allowing me to book out daily. I had been back in Singapore for about a year plus, serving NS, and barely adjusting to life back here. My parents and Qun were overseas. Kor and I were pretty much the only ones at home, each having our own schedules. Our house in Pasir Ris hadn’t been really home because of the various overseas stints each of us had.  22 going on 23, I went to the SPCA at Mt Vernon looking for a companion and a guard dog. I saw a couple of puppies, but only one fawn-colored, golden, doleful, adolescent jumped onto his hindlegs, black spotted purple tongue panting a wained smile. He made eye contact with me. I took his picture, shared it with the family, slept on the decision, and went back for him the next day. In dog years he lived 84 years, but dogs repay your kindness tenfold so for 12 years going on 13, he has given me tenfold in memories, companionship and joy.

120 years is more than enough for my lifetime.

Thank you and goodbye dear Nacho. 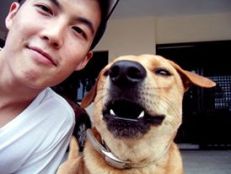