The process of staging Mixed began sometime at the end of October 2016. Raemae (Kok) was one of the winners of the Theatreworks 24 Hour Playwriting competition and her play was chosen for the Performance Tour! part of the Writing and Community program by Theatreworks. It culminated in a performance touring the South East District from 23 Feb to 11 March 2017.

We began first with a series of writing workshops, just Raemae and I, in November 2017. Just to get the draft from the written in 24 hours version to one ready for a 40-minute staging. I started by asking Raemae to fill out the biographies of the characters that she had written. We picked the key characters, and identified the key moments in the story concept. We plunked all of it on A5 sized paper, shuffling the plot around, giving each other various versions. Raemae would decide what she wanted and go off to write. My goal for this phase was to give as much impetus/inspiration/questions to spur Raemae to write. It was more important for me that this young 17-year-old playwright had something to push again to sharpen her voice, rather than anything I might impose.

Following last night's script read, our playwright and director – Raemae and Shou Chen got together for a creative session to further develop the script! Our Performance Tour will be touring the South East District in Feb & March 2017!

Raemae didn’t write a “conventional” political play, although there were undertones. The kitchen sink drama (or in this case, classroom desk) story of Cassandra and Lee, Anika and Lee was the small story that spoke of the big story – racism in Singapore. For me, it was important to bring out the heart of Raemae’s choice, which was an investigation of why her parents chose each other in face of huge resistance from their own parents and society at large. On reflection and in retrospect, could I have given the big story, the scrutiny of racism, a stronger presence in this staging, especially since the platform for the piece is Theatrework’s Writing and Community?

My entry point for the creative pieces is through music. For this piece, I wanted an opening, a short movement sequence with music to bring the audience into the piece. I settled on Dick Lee’s Mustfa, sung by Jacintha Abisheganaden. I also asked the cast to select songs that either spoke to them, or their characters. Raemae was writing in English, but I wanted to bring in the element of being bi-cultural through the mode of bilingualism so the sound design would reflect that element. In addition to grounding some of the locations (school, restaurant) of the abstract staging, music would augment the emotional thread.

MIXED Rehearsal, Feb 5, 2017: Mixed is a Chindian story. Through the play, we get a taste of the sweet in the bitter, and the bitter in the sweet. Today, we took a risk, one that I had a heated internal debate ("was this responsible?"): I sent the actors into a space where they had to use pretty nasty, hurtful words on each other. Words that they’ve experienced, words that they’ve heard, words that I didn't give them a choice but to use on each other. I am inspired by their courage and grateful for the trust that they offered each other and me. Thank you. #chindian #theatreworks #actors #scdirects #kokraemae #sgtheatre #theatre #race

One of the biggest challenges was staging it in three different venues, and community centres no less…each with minimum tech and very distinct challenges. Grace Lin (set designer) and Stella Cheung (lighting designer) had a monumental task, involving three bump-ins and three different spaces. I knew too that I didn’t want a naturalistic staging, so the space needed to be abstract…and of course, beautiful. The lighting practicals manipulated by the actors was also incorporated into the staging and story telling, which was a semantic choice but also a sneaky low tech way of ensuring that Eurasian House and Mountbatten CC (which had little to no lighting rig) would be lit.

On Feb 23 2011, we opened at Marine Parade CC, we had the best tech here in terms of lighting choices and sound.

We transformed the Mountbatten CC stage into a blackbox, sitting about 50 pax only. This was a thrust staging. I confess, this was my favourite.

Are you ready for yet another touching performance of 'Mixed'? Our performance at Mountbatten CC offers a much more intimate feel compared to our past venues. See you there! #mixed2017 #theatreSg #TheatreWorks #PerformanceTour

Synopsis: Growing up Chindian in Singapore has not been easy for Anika Lee. Her parents, Cassandra and Lee, have fought hard their whole life to protect their kids from racial tensions both in their family and out. At 21, Anika has cultivated a fire in her that allows her to navigate the difficulties of being mixed. Now a teacher-in-training, she is whole, and ready to fight for what she believes in. She even has her eye on a guy at the job she loves…

Mixed scrutinizes a racial divide that is supposedly cracked, bringing to light fragments that still have the power to cut. Mixed is a play about loss, it’s also about love – it’s about falling. And it’s about getting back up.

Mixed is performed at three different locations, each offering audiences a new experience of the play. 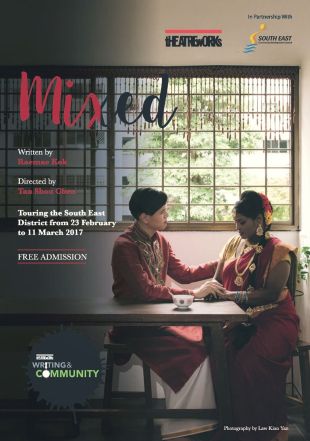 One thought on “ Mixed (2017), Theatreworks Process Reflection and Archive ”